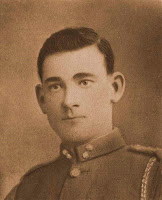 My mother has lost all connection with her Irish paternal roots. Her family came from Dublin but she grew up in Belfast. Her father Peter DALY (pictured) was a soldier in the Royal Dublin Fusiliers during the First World War, sustaining an injury which eventually took his life at the age of 34, a year after his only daughter, my mother, was born. So my mother sadly never knew her father from Dublin.

So what do we know? Through a smattering of records and some brief memories of my mother, here is what we have been able to piece together.

Thomas DALY (my great grandfather) was born in 1861 in Dublin, Ireland. He married Jane McMAHON on 22 August 1887 at St Catherine’s Roman Catholic Chapel in southern Dublin.

They had two children that we know of:
1. James DALY, who was born in 1888 in Dublin
2. Thomas Peter DALY (my grandfather) (sometimes using his middle name Peter as his Christian name), who was born on 17 April 1890 at their residence at 67 Marrowbone Lane, Dublin.

Of interest, back in the late 19th century, Marrowbone Lane, situated in Merchant’s Quay just west of St. Patrick’s Cathedral, appeared to be one of the poorer areas of Dublin. The 1901 census shows Thomas DALY as a labourer, living with his two sons (James and Peter) and his brother (another James) and five other families.

So, it is enticing to think that you may be out there somewhere, a descendant of my great uncle James (or even possibly of a brother or sister of his). An Irish connection that has eluded us all of these years and remains one of those unsolved family mysteries.
Posted by Aussie Mike at 22:51 12 comments: